Throughout its history, Molecor has received various awards and recognitions that have notably contributed to consolidating its global presence and leadership as a technological company and leader in solutions for water transport in its different infrastructure, building and sanitation applications. The most important awards received by Molecor have been:

IAgua Award for Agro Company of the Year

The iAgua Awards are the most prestigious awards in the water sector in Spain and Latin America. In the 2021 edition, Molecor received the iAgua Award for Agro Company of the Year, an award that recognizes the work carried out by the company in the irrigation sector.

On December 4, 2020, Molecor is awarded in the national phase of the Quality Innovation Award, QIA 2020 in the Potential Innovation Category for the development of the innovation Technology M-OR-P 5012 for manufacturing large diameter, DN500-DN1200, Oriented PVC pipes (PVC-O).

The National Association of Centers for Excellence - CEX awards Spanish organizations in the national phase of the Quality Innovation Award, QIA, a competition created in 2007 by Excellence Finland to promote innovative projects in companies and organizations, share experiences and give local and international recognition to the best, with the ultimate goal of increasing the competitiveness of companies and participating countries. 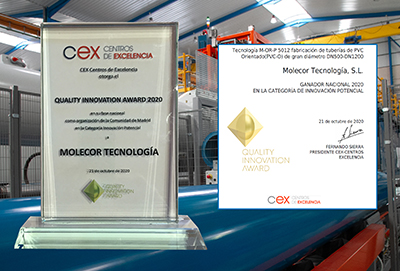 In the edition of Smagua 2019 the Technical News Contest whose purpose is to reward products and systems that imply a technical evolution in the water sector, has rewarded the latest development of Molecor: the "CPVC-O Pipes" with the award of Technical Novelty. The CPVC-O pipes, a new product in which the company has been investigating and which has been successfully tested, represent a new milestone for the company.

During the development of the Technical News Contest within the edition of Smagua 2017, Molecor obtained the name Outstanding Technical Novelty for the ecoFITTOM® fittings, exclusive product worldwide that allows to obtain uniformity in terms of materials, properties and characteristics in the water networks that was not possible until now. ecoFITTOM® is an efficient solution in costs and able to improve the characteristics and the long term results obtained by the fittings manufactured in other materials. 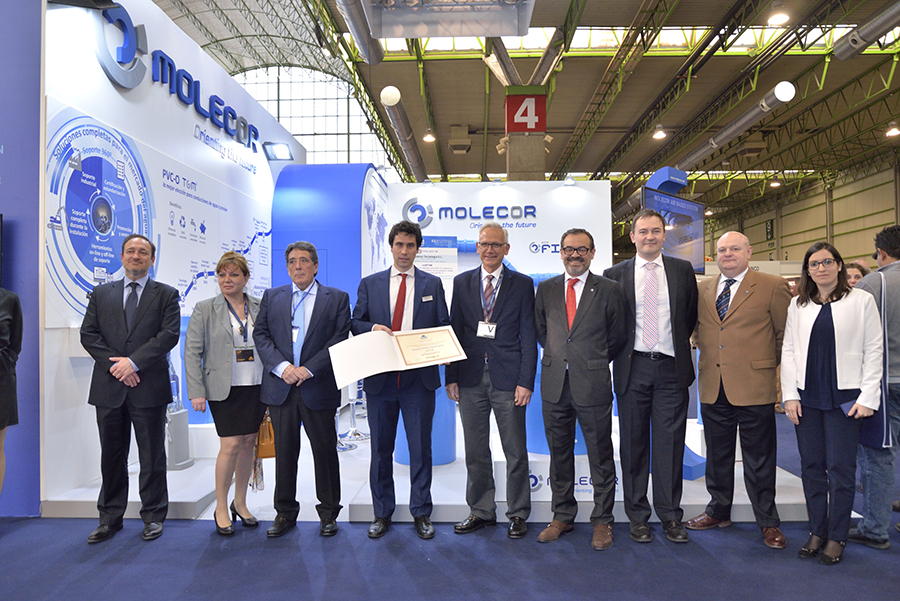 On November 4th, 2015 Molecor was awarded as the best "SME of the Year" at the II CEPYME Awards convened the Spanish Confederation of Small and Medium Enterprises and the Spanish Federation of Autonomous (CEAT).

The aim of these awards is to recognise and disseminate the work of small and medium enterprises and of self-employed, highlighting the performance of their work at the service of society both in Spain and abroad, as well as the main role they play being motor of the economy.

The awards, had the honorary presidency of His Majesty the King, and were sponsored by Banco Santander in collaboration, among others, with Facebook and Randstand. 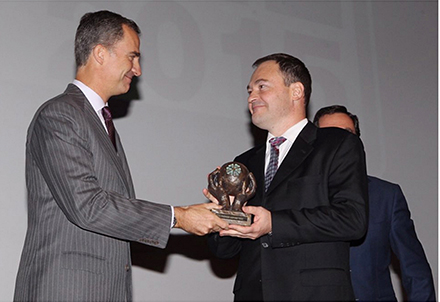 In 2013 the Spanish company Molecor was awarded with the highest award in the Solvin Awards competition, dedicated to innovation and technological advances of PVC in different sectors. The 78 participating projects came from very different sectors ranging from construction to electronics; gardening road safety; health to mechanical motor and other manufactures. Besides this, Molecor was a finalist in other awards such as the European Business Awards.

On October 10th, 2012 Molecor received the Entrepreneur XXI Award, an award that honors the most innovative companies from two to seven years, recognizing the contribution made to profitable and sustainable solutions for society. This is the highest award for entrepreneurs in Spain. Molecor prevailed in the category Grow XXI to the other five finalists, Avinent, ParkHelp, ReviewPro, Social Point and Zyncro that applied for this award.